And the 11-year-old black Labrador retriever gets plenty to encourage him during physical therapy at the Virginia-Maryland College of Veterinary Medicine.

After developing hind limb weakness from neurologic causes, as well as general soreness and decreased mobility because of arthritis, Saint was referred to the college’s physical rehabilitation service by his veterinarian, Virginia Tech alumnus Thomas Blaszak.

“Even taking joint supplements and various forms of pain medication and having undergone therapeutic laser treatments, Saint still endured arthritis,” said Blaszak. “Referring Saint for rehab at the veterinary college has helped him regain some muscle and strength in his legs, ultimately improving his mobility and quality of life.”

Saint’s owner, Krista Sinnott, a realtor who volunteers for Saint Francis Service Dogs of Roanoke, adopted the Lab when he needed a new home upon his retirement at age 8. He’s now a member of the family.

“Saint goes to work with me almost every day. He’s in his second career in commercial real estate,” she said. “We want him to be as active as he can be, but he began having trouble on his walks. He would stumble, and there was weakness in his rear end. He had a hard time getting up off the floor.”

Although Sinnott was unfamiliar with physical therapy for dogs, she was entirely receptive when Blaszak recommended it for Saint. “It has made a huge difference,” she said. “He plays a lot now. He’s taking longer walks, and he’s much more stable. We have stairs in our house, and he is much more confident going up and down and has far fewer spills. His quality of life is much better.”

Since his initial evaluation by the veterinary college’s rehab team in July 2019, Saint has visited the service regularly, first undergoing treatment twice weekly, then moving to weekly and now bimonthly.

During his first appointment, “Saint had no spunk,” said Florence “Flori” Bliss, a licensed veterinary technician who completed the Canine Rehabilitation Certificate Program. Having worked with him for several months, she definitely sees a change. “He has a job again,” she said. “He really lights up.”

A typical rehab session moves at a good clip, progressing from one exercise to the next to keep Saint interested and on his toes. First, short hurdles are lined up to form a mini-obstacle course on two long mats.

Saint steps over the hurdles willingly, one by one, up and back, all the while prompted by Bliss’ encouraging words — “Focus. Good boy. Good job.” — and the jar of frozen baby food she holds before his nose. The multiple repetitions of the exercise help his strength and balance, requiring him to pick up his feet at various times and shift his weight.

Bliss next leads the Lab through a series of sitting and standing exercises, “sit, sit; up, up; down, down,” which helps strengthen his hind-end muscles to offset the effects of neurologic issues and arthritis.

“This good boy, he knows exactly what to do,” said Bliss. “When we first saw Saint, he wasn’t able to do any of this. At home, he was having trouble with routine tasks like getting from a sit to a stand. Our focus was to improve his strength, balance, and core to help him go about his day with independence. For example, we started with some modified/assisted sit-to-stand exercises with low repetition; as he strengthened, we were able to progress to doing 10 reps independently now.”

Then, a rubber balance ball is brought out, and Saint places his front paws upon it, still licking at the jar. “This is another huge development,” Bliss said. “When we first assessed Saint, he would have fallen off or refused to do this exercise, which requires a lot of core work, balance, and confidence. Now, he has all three.”

Tracking the baby food, Saint steps off the ball and is led for another go over the hurdles and then returns to stand on a larger ball. Though his back legs are shaking, he tolerates the exercise. “That was really good, buddy,” Bliss tells him. He has already licked his way through three jars of baby food.

The gradual repetition of the exercise has allowed Saint both to grow stronger and to develop his confidence, and he has finally graduated to putting his back legs on the ball. “We switch things up to keep him entertained,” Bliss said. “Repetition is good, but preventing boredom and targeting different muscle groups is important for these guys.”

In addition to floor exercises during his visits, Saint is also given an acupuncture treatment by fourth-year veterinary student Savannah Giannasi, who has completed the CuraCore Medical Acupuncture for Veterinarians certification course and the veterinary college’s course in complimentary medicine/physical rehabilitation.

Saint sprawls comfortably on a colorful mat during the session, hardly lifting his head to lick the baby food that Bliss offers while Giannasi inserts the needles with precision.

“These needles are super-tiny, and patients usually don’t feel much until after about five or 10 minutes,” said Giannasi. “They’ll let you know when they’re starting to feel a little sensation.”

When Giannasi has completed the acupuncture, it’s time for a more conventional spa treatment to close out Saint’s session. Bliss rises and walks over to the underwater treadmill, adjusts the ramp, and leads Saint into the tank.

“I remember the first time he went into the treadmill,” Bliss said. “He just flopped down as if he knew exactly what was going to happen.” She explained that many patients are uncertain when being introduced to the treadmill: a closed-in space with loud noises and a moving floor.

“We use a lot of positive reinforcement, and the owners are always present to reassure their pets,” she said. “We have several different techniques when introducing patients to the water, depending on their personalities, and we never force anything. Most patients will acclimate within two or three sessions, but Saint was a pro after the first time.”

Once Bliss flips the switch, the holding tank quickly fills with warm water, some 400 gallons, and the treadmill begins moving. The machine makes a racket, but Saint walks in comfort because most of his weight is supported by the water, which helps take pressure off his joints. The exaggerated range of motion maintains joint health and the elasticity of surrounding muscles and tendons.

The water is kept between 78 and 82 degrees, so the tank time is truly therapeutic. Saint walks for nearly half an hour, intermittently offered a few licks of baby food to keep him on task. “He loves the water treadmill. This is when we get to know each other,” said Bliss with a big smile.

After the tank has completely drained, Saint is led back down the ramp to be dried. “We should scent the towels so it’s really like a spa in here,” said Bliss, who admitted that she’d purchased a hair dryer specifically for the heavy-coated Lab. Saint then receives a granola snack for his final reward.

“Both physically and mentally, Saint is just a brighter dog,” said Virginia Kiefer Corrigan, assistant professor of community practice in the Department of Small Animal Clinical Sciences and a Certified Canine Rehabilitation Practitioner who also works in the rehabilitation department. “When he shows up, I always think to myself, ‘you look just like a puppy.’ He gets so excited, and it really warms everyone’s heart because he has lived a tremendous life of service.”

Having participated in scores of rehab sessions, Corrigan added: “Not only do these older patients get physically better, their mental status improves because they have something to think about, something to work on, something to learn. Old dogs can learn new tricks. Look what Saint has learned in two months’ time.” 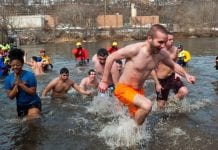 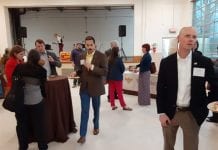 Cable competition could be coming to Christiansburg

Pets of the Week 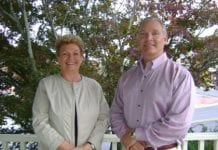 ©
Do NOT follow this link or you will be banned from the site!
MORE STORIES